Do immigrants working in formal eldercare have a more precarious situation at work than their native co-workers?
In this article, we investigate whether immigrants as a category have worse working conditions than their Swedish-born colleagues, when characteristics such as age, gender, education and workplace are the same. The article is based on a dataset that was gathered in 2012 in order to investigate working conditions among members of the trade union Kommunal. Data consist of records for 5675 individuals and multivariate analyses (factor analysis and OLS regression) were used to investigate difficult work conditions. Twenty-four per cent of the respondents were born outside Sweden. The differences between the categories immigrants and native-born were small overall, but immigrants experienced more support and control over their own work and less workload, although they had higher values on a factor that indicates discontent with other aspects of the work situation. A surprising finding was that men born outside Sweden experienced less workload than other workers and did not differ significantly on other factors.
The main conclusion of the study, that immigrants as a category cannot be linked with specific vulnerability, needs to be interpreted with some major limitations taken into account. Only union members were investigated and it is likely that immigrants and employees with precarious working conditions were underrepresented in the sample. The dataset did not allow for a division among immigrants of different origin, and specific narratives about vulnerability were not available. Despite these limitations, the study indicates that there is a large group of “established” immigrants in elder care who perceive their working conditions in a way that is similar to that of native care workers. 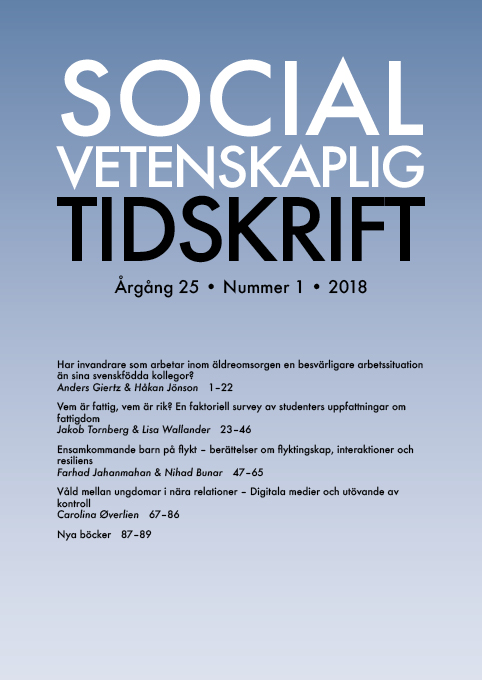